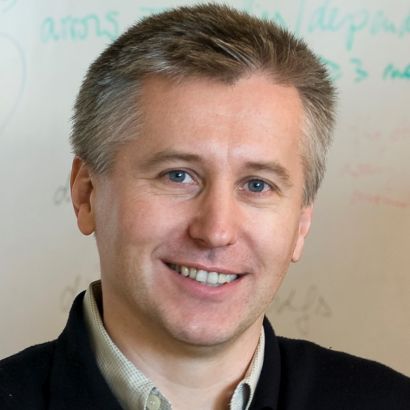 Andrej Sali received his BSc degree in chemistry from the University of Ljubljana, Slovenia, in 1987, working on the sequence-structure-function relationship of stefins and cistatins under the supervision of Professor Vito Turk; and his PhD from Birkbeck College, University of London, UK, in 1991, developing the MODELLER program for comparative modeling of protein structures under the supervision of Professor Tom L. Blundell. He was then a postdoc with Professor Martin Karplus at Harvard University as a Jane Coffin Childs Memorial Fund fellow, studying lattice Monte Carlo models of protein folding. From 1995 to 2002, he was first an Assistant Professor and then an Associate Professor at The Rockefeller University. In 2003, he moved to University of California, San Francisco, as a Professor of Computational Biology in the Department of Bioengineering and Therapeutic Sciences, Department of Pharmaceutical Chemistry, and California Institute for Quantitative Biosciences (QB3). He was recognized as Sinsheimer Scholar (1996), an Alfred P. Sloan Research Fellow (1998), an Irma T. Hirschl Trust Career Scientist (2000), the Zois Award of Science Ambassador of Republic of Slovenia (2007), a Fellow of International Society for Computational Biology (2014), Jubilee Professor of Indian Academy of Sciences (2017), Bijvoet Medal recipient (2018), and member of National Academy of Sciences of USA (2018). He has been an Editor of Structure since 2002. He is also a Founder of Prospect Genomix that merged with Structural Genomix (2001); Global Blood Therapeutics (2012); and Quanta Therapeutics (2018).

Research projects: Dr. Sali aims to develop and apply computational methods for integrative determination of the structures and dynamics of macromolecular assemblies, in turn informing the function and evolution of these systems as well as how to modulate them. The broad goal is to contribute to a predictive spatiotemporal model of the cell. This goal is being achieved by a formal integration of experiment, physics, and statistical inference, spanning all relevant size and time scales. Our computational methods are implemented in the open source Integrative Modeling Platform (IMP) and the resulting models are deposited in the PDB-Dev database. This research enhances the discovery of general principles that underlie all cellular processes, which in turn also facilitates drug dicovery.