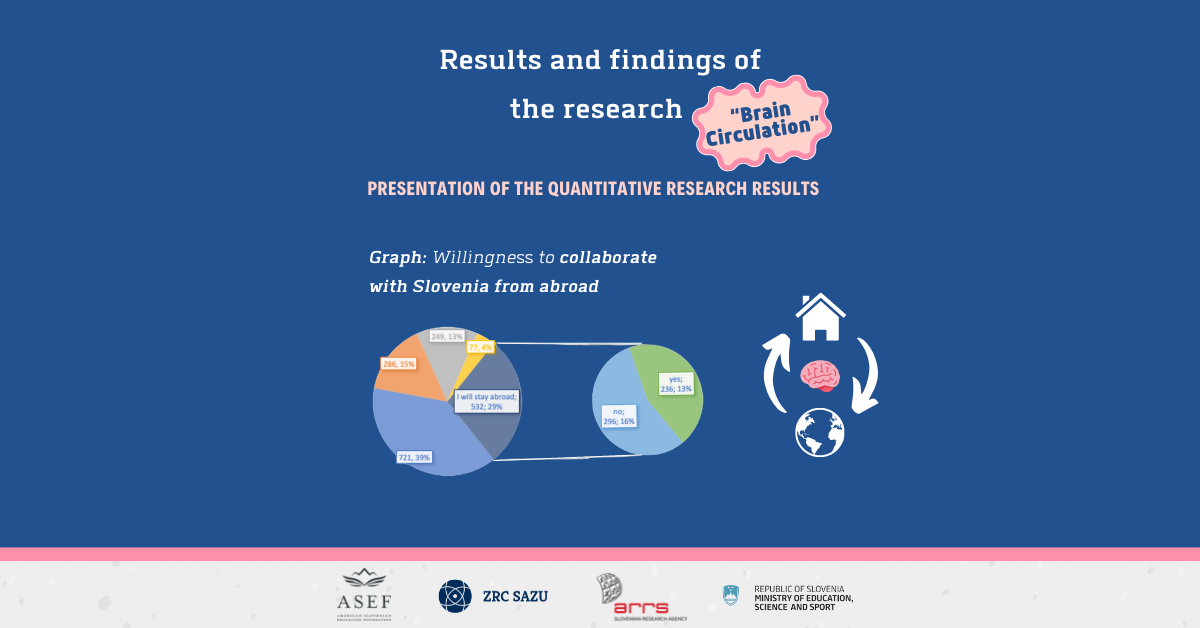 Presentation of the Quantitative Research Results

We have mentioned many times now the problem of brain drain, which we want to address with the effective policy of brain circulation, that would attract Slovenes to Slovenia or at least allow the fruitful cooperation between Slovenians abroad with their homeland. In the coming paragraphs, we show you a brief overview of different aspects regarding the return to Slovenia, which we gathered as part of the TRP 2019 research on the topic of brain circulation.

Reasons for returning to Slovenia in the future

Most of the respondents who will return to Slovenia (N=287) have stated as a reason that they want to get together again with their family or be in their home country (40.07 %). This is followed by a reason stating better natural and social conditions (nature, education, standard of living etc.).

What should be different in Slovenia in order for Slovenes to return?

Most Slovenes who are currently abroad believe that sociopolitical arrangements (39.94 %) should change in order for them to return. This dissatisfaction relates to the inappropriate payment according to the work and effort invested, the desire to change the Slovenian mentality is present, where differences and foreignness would be better accepted. Respondents often stated that nepotism reigns in the company and that bureaucratic procedures are too complicated and outdated. They also point out that in Slovenia there is insufficient investment in the development of science and technology and the promotion of cooperation in the international environment. However, they would return if working conditions improve and there is a greater possibility of professional advancement, they want better relations at the workplace, fair remuneration based on success and more career opportunities.

Of all the respondents (N=2,036), there are 546 who do not consider returning to Slovenia as an option. They are mainly repelled by poor working and life conditions – for example poor pension and tax arrangements, inability to obtain work and lack of quality scientific activities. The second most common reason is poor sociopolitical conditions – for example bureaucratic complexity, general negativity, high taxes. This is complementary to the factors that are attracting Slovenians to a life abroad: those are good living and working conditions (good country support, open people, higher values) and good sociopolitical regulation (orderliness, better health care, less discrimination).

Cooperation with Slovenia from abroad

An important aspect of our research is to determine whether the Slovenes abroad are willing to cooperate with their homeland. According to the information received, it is evident that 43 % of those are ready to cooperate with Slovenia or are already doing so. They most commonly cited professional cooperation. Other types of cooperation are mostly related to the circulation of knowledge, the integration of Slovenia with the rest of the world and cooperation in the scientific field.

The reasons for returning to Slovenia

Some respondents have already experienced life abroad and then returned to Slovenia. Of all the participants, there were 245 who returned, and cited the family as the most common reason for return. The next two most important were employment and studies.

Therefore, the respondents mostly decided to live abroad because of the good conditions it offers in areas where Slovenia has shortcomings, especially in the work and sociopolitical field. Life abroad also offers them better opportunities for studies and employment, which do not exist in Slovenia. However, it is important to point out that individuals from abroad are willing to cooperate to a large extent with Slovenia to strengthen good relations and thus take care of the circulation of knowledge, which is one of the key pillars of the brain circulation policy.

Mentioned findings were obtained within the framework of the TRP project “Brain Circulation,” which was carried out between November 1, 2019, and October 10, 2021. The project is partly financed by the Slovenian Research Agency (ARRS) and the Slovenian Ministry of Education, Science and Sport (MIZŠ). Participating research organizations were the ASEF Institute for Education and Research (ASEF) and the Research Center of the Slovenian Academy of Sciences and Arts, Slovenian Migration Institute (ZRC SAZU SMI), with Dr. Dejan Valentinčič as the project leader.