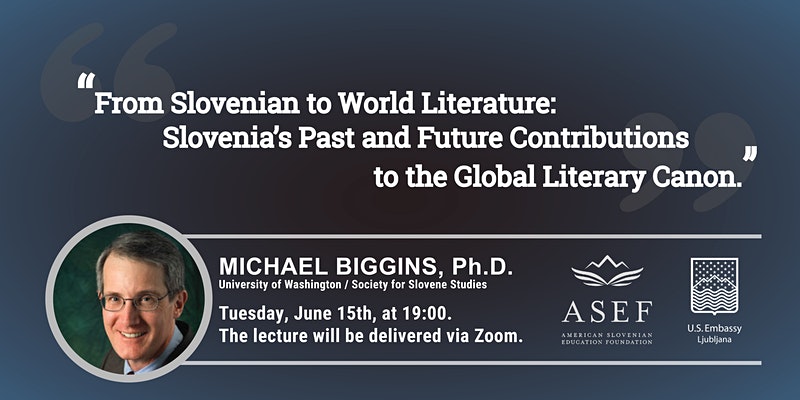 The American Slovenian Education Foundation (ASEF) is organizing a new ASEF Speaker Series event. This time prof. Michael Biggins will deliver a lecture titled “From Slovenian to World Literature: Slovenia’s Past and Future Contributions to the Global Literary Canon“. The lecture will be held on Tuesday, June 15th, at 19:00 CET.

One of Slovenia’s comparative advantages in the cultural sphere has long been its creative literature in the genres of narrative prose fiction, poetry and drama. Offsetting the country’s remarkable literary productivity and originality has been the relative obscurity of the literature’s medium, the Slovene language, not to mention the location and identity of its speakers. For over two centuries it has been a perennial dream and challenge of many of Slovenia’s most accomplished literary practitioners to write on themes and in styles, language and genres that might impart enough momentum to their work to take root in foreign as well as domestic soil, and thereby contribute to the ongoing dialog about and evolution of imaginative literature on a continental and global scale. After identifying some of Slovenia’s most prominent past break-throughs and near-heroic attempts at break-throughs onto the world literary scene, this talk will devote attention to several contemporary Slovene authors whose work stands a considerable chance of being recognized, embraced and emulated by readers and writers the world over.

Michael Biggins is responsible as translator for a number of the classics of twentieth-century Slovenian iiterature published in English, including Slovenia’s internationally best-selling novel of all time, Vladimir Bartol’s Alamut (Scala House 2004, reissued by North Atlantic 2007), Triestine Slovenian author Boris Pahor’s memoir of survival in Nazi concentration camps titled Necropolis, (Harcourt 1995, reissued by Dalkey Archive in 2010), the three-volume auto-fictional novel Newcomers by Lojze Kovačič (Archipelago 2016-2024), I Saw Her That Night by Drago Jančar, several collections of poetry by Tomaž Šalamun, and most recently The Masochist, a novel set in fin de siècle Vienna and Central Europe by Katja Perat (Istros 2020).

In 2021 Biggins became the first non-Slovenian recipient of the Primož Trubar Award for lifelong contributions to advancing and preserving Slovenia’s written cultural heritage. President of the international Society for Slovene Studies since 2017, and Honorary Consul of Slovenia for Washington State since 2018, he lives in Seattle and teaches Slovenian language and literature, as well as Slavic to English literary translation at the University of Washington, where his primary employment is as curator of the university library’s nationally significant collection of over a half million volumes in more than twenty languages across the spectrum of Slavic and East European studies.