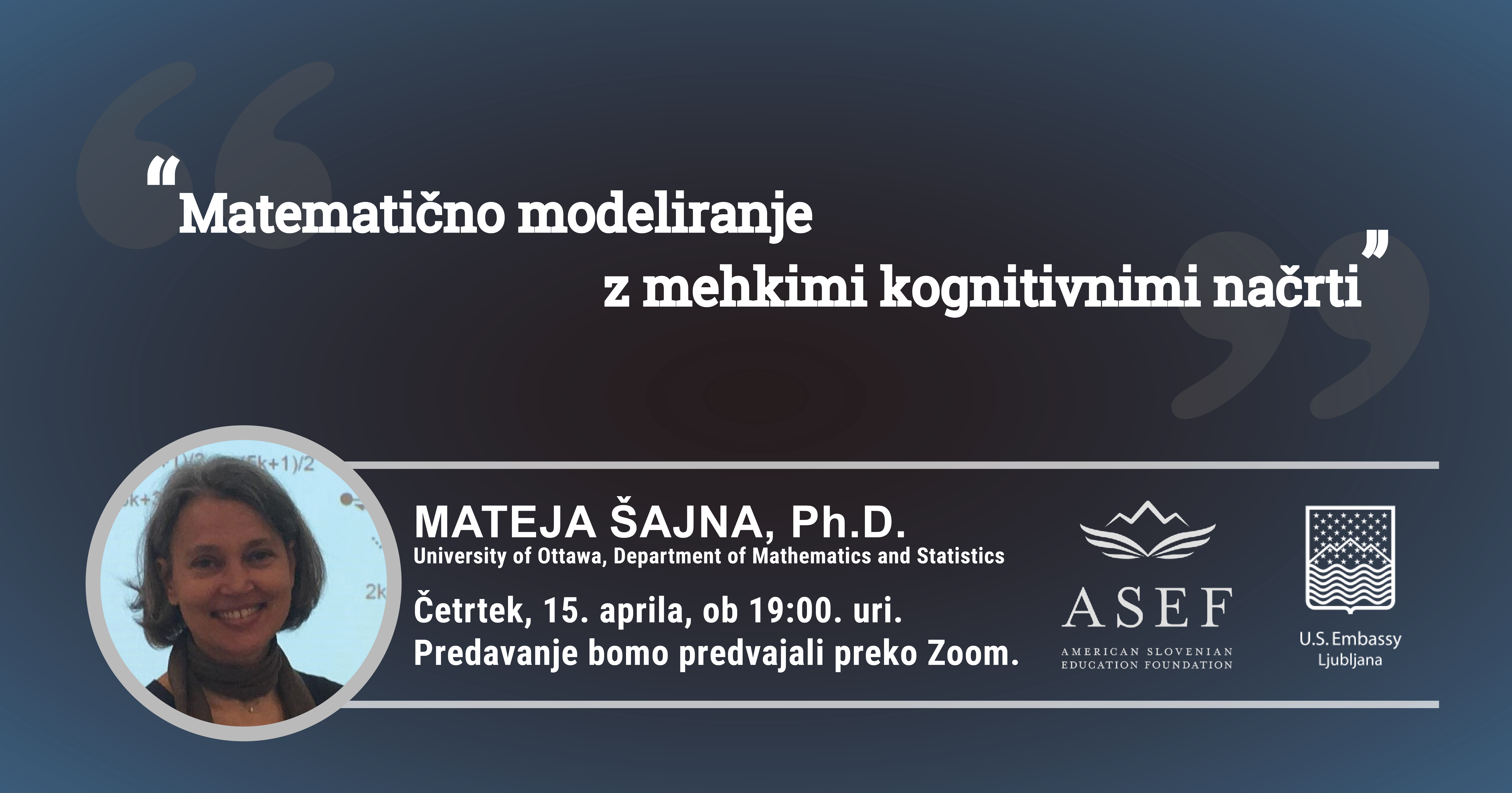 Mateja Šajna: Mathematical modelling with fuzzy cognitive maps: what do we learn from transitive closure?

Only two days separate us from the new lecture ASEF Speaker Series, organized by the American-Slovenian Educational Foundation (ASEF). This time, dr. Mateja Šajna presented a lecture entitled “Mathematical modelling with fuzzy cognitive maps: what do we learn from transitive closure?”.

Please register for the lecture by 6 pm on April 15. We will send a Zoom link to the email address to all registered before the event.

Dr. Mateja Šajna is a full professor of discrete mathematics at the Department of Mathematics and Statistics of the University of Ottawa. She began her career in Slovenia, where she graduated in mathematics at the Faculty of Mathematics and Physics, University of Ljubljana. She continued her studies at Simon Fraser University in Canada, where in her doctoral dissertation under the mentorship of the well-known mathematical theorist dr. Brian Alspach proved the assumption of the decomposition of fully connected graphs. In 2013, she was awarded the Kirkman Medal for her doctoral dissertation by the Institute for Combinatorics and its Applications. In 2002, she became a full professor at the University of Ottawa, where she also received the NSERC University Award. In his research work, he mainly deals with graph theory, where he focuses on symmetries of graphs, graph decompositions, hypergraphs and the useful value of such methods.

Fuzzy cognitive maps are used in science, engineering, and the social sciences to represent a body of knowledge with a causal structure (be it scientific or traditional knowledge, or a personal view). The type of fuzzy cognitive map considered in this work consists of a number factors, and direct impacts between factors. Each direct impact is assigned a direction, sign (positive or negative), and weight, and is interpreted either as a direct causative/preventive or enhancing/diminishing relationship.

In this talk, we shall describe two mathematical models for the transitive closure of a fuzzy cognitive map: the fuzzy model and the probabilistic model. Both models can be used to determine the total impact (arising from all direct and indirect impacts) of each factor on every other factor. The result allows for comparison of different standpoints, and as a guide to decision-making processes.
We shall also present several interdisciplinary studies where transitive closure was used as the main analytical tool.

We shall also present several interdisciplinary studies where transitive closure was used as the main analytical tool.