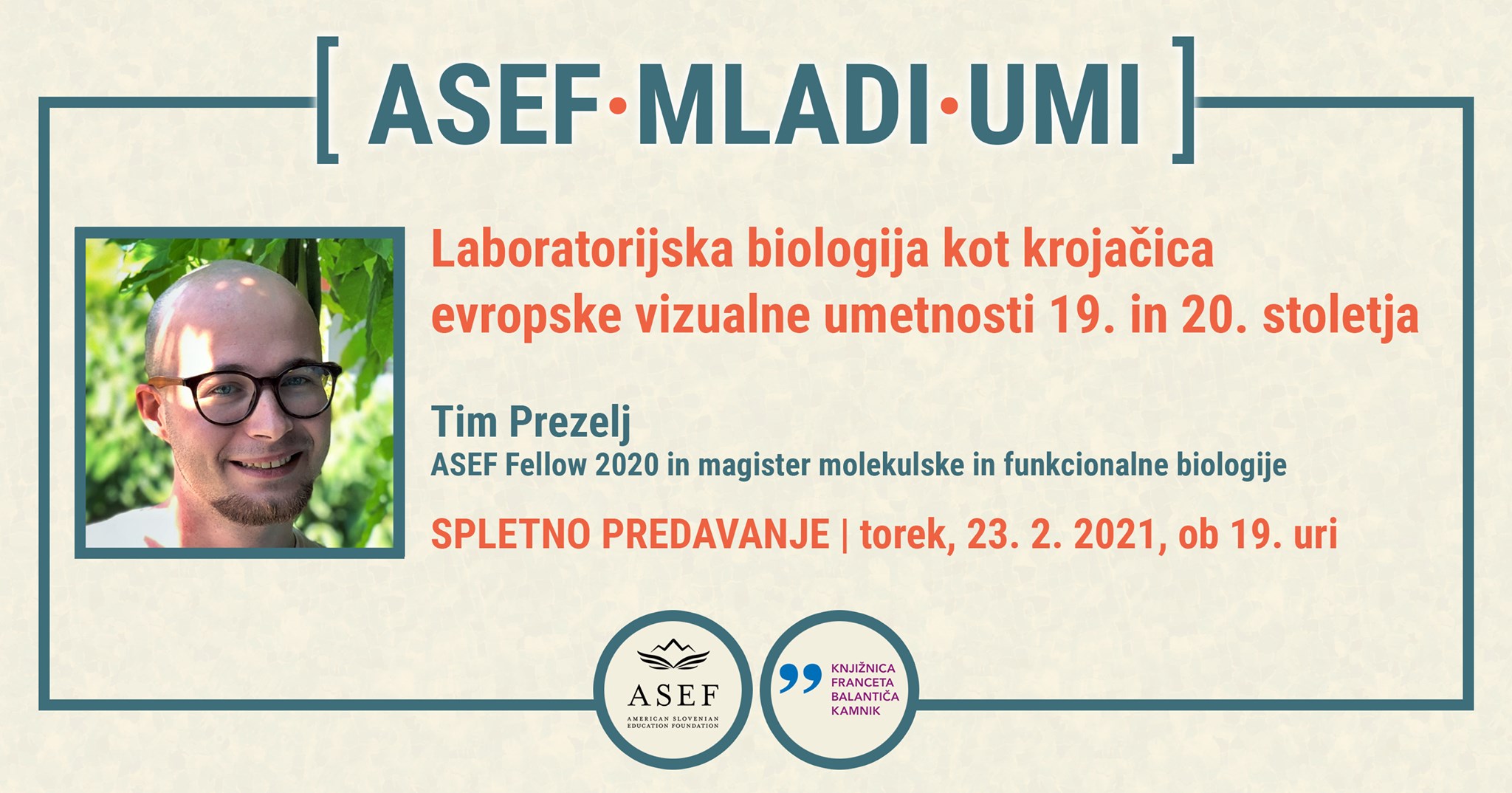 ASEF and the France Balantič Kamnik Library are organizing an online popular science lecture held by Tim Prezelj, ASEF Fellow 2020, with a master’s degree in molecular and functional biology. The lecture held in Slovene will take place online on Tuesday, February 23, 2021, at 7 PM CET.

REGISTRATION
To attend the lecture, you must register by February 23, 2021, at the latest by 6 PM CET. The Zoom link for access and the code for asking questions will be sent to all registered users by e-mail on the day of the event.

ABOUT THE LECTURE
Art and science have always been closely intertwined, as many works of art have emerged from natural science discoveries, and at the same time, art has fueled a desire for a better knowledge of the world. Of all the scientific fields, perhaps laboratory biology has had the most radical influence on the development of European visual art. In the Middle Ages, certain microbes caused many epidemic diseases, depicted in many famous works of art by world masters. At the turn of the 19th and 20th centuries, scientific and technical progress was at its peak. Improvements in the microscope have made it possible to investigate previously invisible microorganisms. Young ambitious artists, tired of the exploited motifs of the then established historicism, saw completely new forms through the microscope. These are also relatively well described mathematically today. The German naturalist and artist Ernst Haeckel have special merits in this. With his work “Art Forms in Nature” (Kunstformen der Natur), he managed to bring the natural forms of microbes and other organisms closer to the general public in an original way. Many important artists and scientists have been and still are inspired by this work. The potential of microbes as a medium of painting was first recognized by Nobel laureate Alexander Fleming. Following, a very dynamic scientific and artistic field of the so-called BioArt developed from this. All of this reflects the importance of a broad view and an interdisciplinary approach to achieving groundbreaking scientific and artistic results.

ABOUT THE LECTURER
Tim Prezelj holds a bachelor’s degree in microbiology and a master’s degree in molecular and functional biology from the Biotechnical Faculty of the University of Ljubljana. Parallel, he also studied cognitive sciences and has spent quite some time studying abroad – especially in Germany, Italy, and Austria. He recently completed a research visit to the University of Vienna through the ASEF scholarship program, where he worked under the mentorship of prof. dr. Mihaela Pavličev. There, he will also continue his educational path, starting with a doctoral study in evolutionary and theoretical biology. He has long devoted his research to molecular biology, immunology, and the evolution of cancer. In recent years, he has been more intensively involved in evolutionary psychology and the neurology of gender and gender identity, religion, and aesthetics. He is also interested in art history and tries to connect the natural sciences with the humanities. New interdisciplinary fields, such as neuro- and psycho-aesthetics, present him with a special challenge.