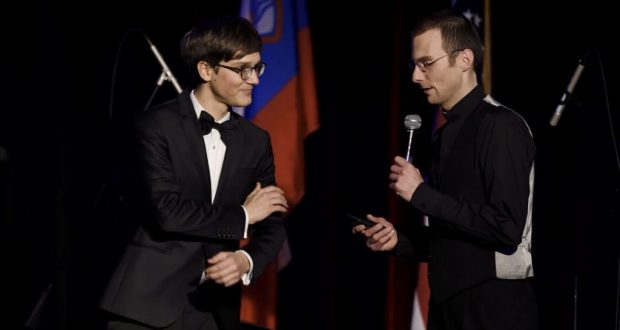 On Sunday, January 25, 2015, ASEF celebrated the successes and aspirations of its very first year. During the program, the Honorary Consul of Slovenia, Thomas J. Brandi, offered introductory remarks and Rev. Michael E. Engh, S.J., President of Santa Clara University, delivered the invocation. Dr. Božo Cerar, Ambassador of the Republic of Slovenia to the U.S., extended his greetings and read a letters in support of the Foundation from Borut Pahor, President of the Republic of Slovenia, and Mr. Gorazd Žmavc, Minister of Slovenians abroad. Richard S. Gordon, California State Senate Assembly Member (24th District), offered greetings as well. Jure Leskovec and Peter Rožič, S.J., members of the ASEF Board of Directors, reported on the foundation’s activities. At the annual gala, two Slovenians scientists, Zvonko Fazarinc and Franc Rode, were given the lifetime achievement awards. Working mainly for Hewlett-Packard, the two worked on the development of the GPS system and the first electronic calculator.

The musical part of the evening featured a young musician, Anja Kotar. Anja had just completed a successful kickstarter project with logistical support from ASEF. Anja (17), who performed at the 2015 gala, is a California based singer and songwriter, working on her Debut EP Album.