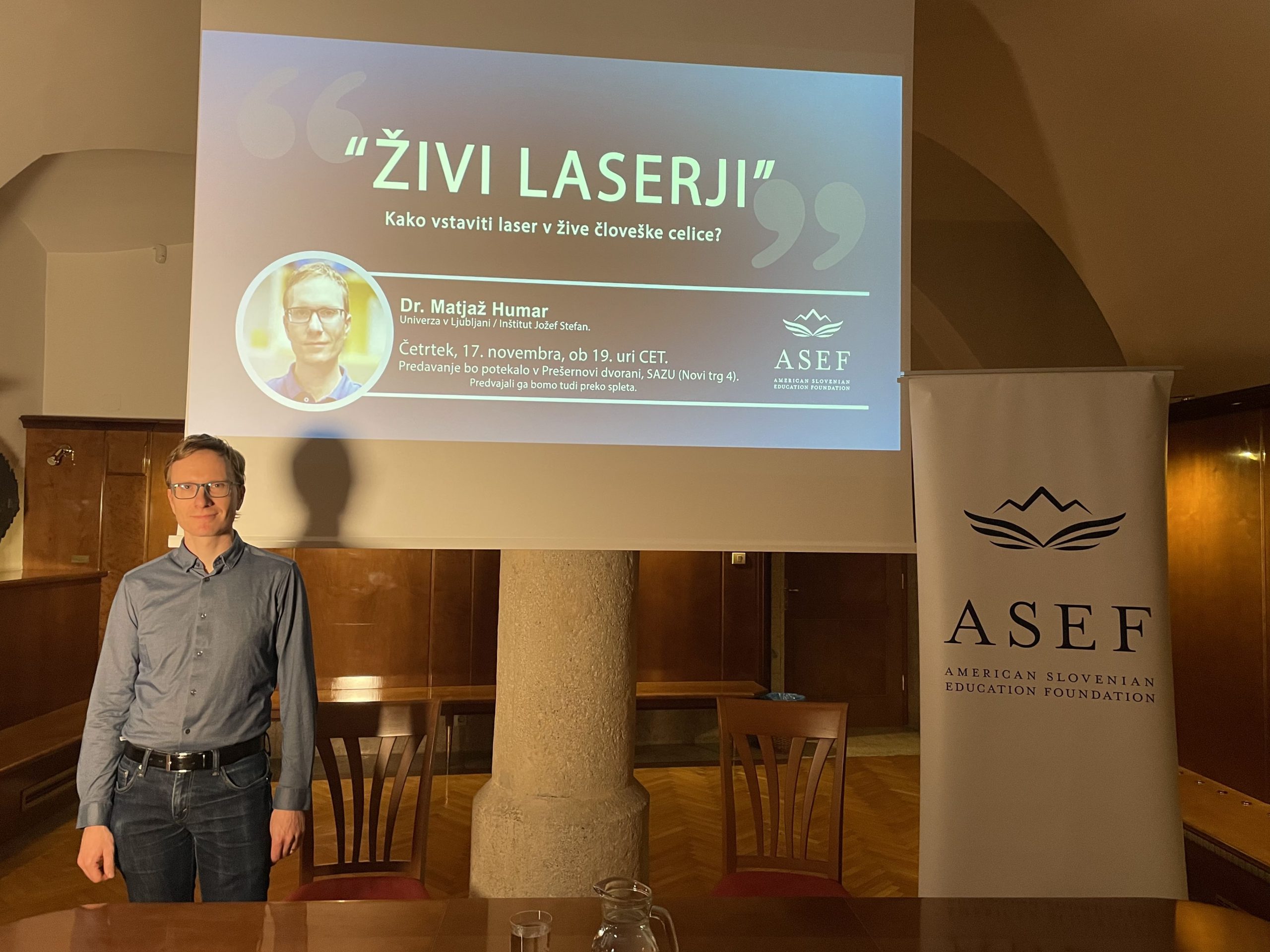 On Thursday, November 17, the ASEF Speaker Series, a series of lectures where ASEF professors present their research areas and findings, took place. This time the speaker was Dr. Matjaž Humar, Assistant Professor at the Faculty of Mathematics and Physics, University of Ljubljana, and Head of the Laboratory for Bio-Integrated Photonics at the Jožef Stefan Institute. After obtaining his Ph.D. in Physics, he did postdoctoral training at the Wellman Center for Photomedicine: Harvard Medical School and Massachusetts General Hospital. He has been awarded several research fellowships, including the prestigious ERC Starting Grant for the project entitled ”Cellular Lasers – Coupling Optical Resonances to Biological Processes”. He has also recently been awarded the Blinc Prize for Early Career Physicists.

At the beginning of the lecture, the lecturer gave the audience an introduction to the laser and its components. Most of the time we think of a laser as an external object, but Dr. Humar’s idea was to embed a laser in a body or a cell, or even to create a laser from biological matter. This would allow a very precise study of biological processes and further research into lasers that are made from biological substances and take on their properties. 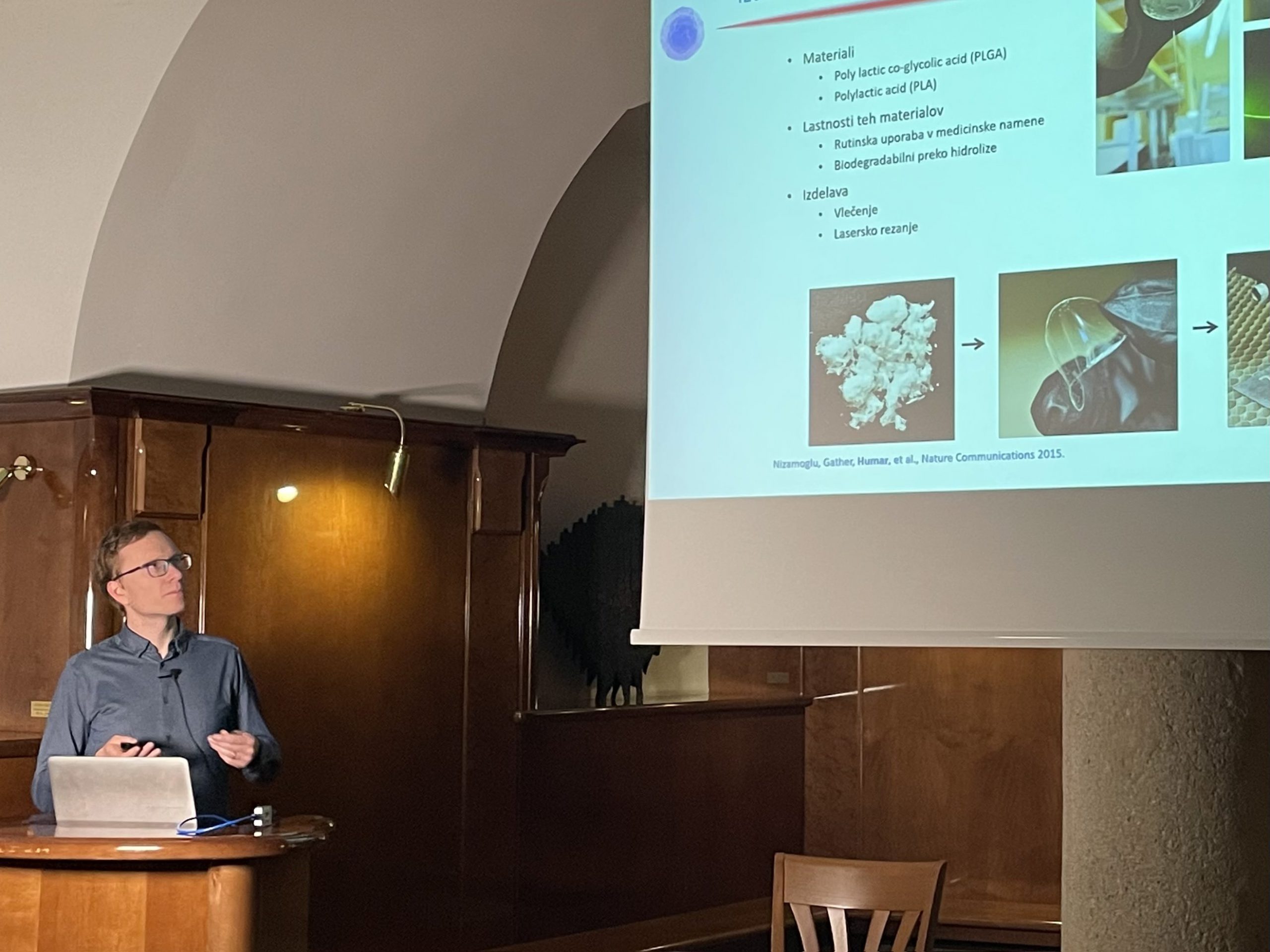 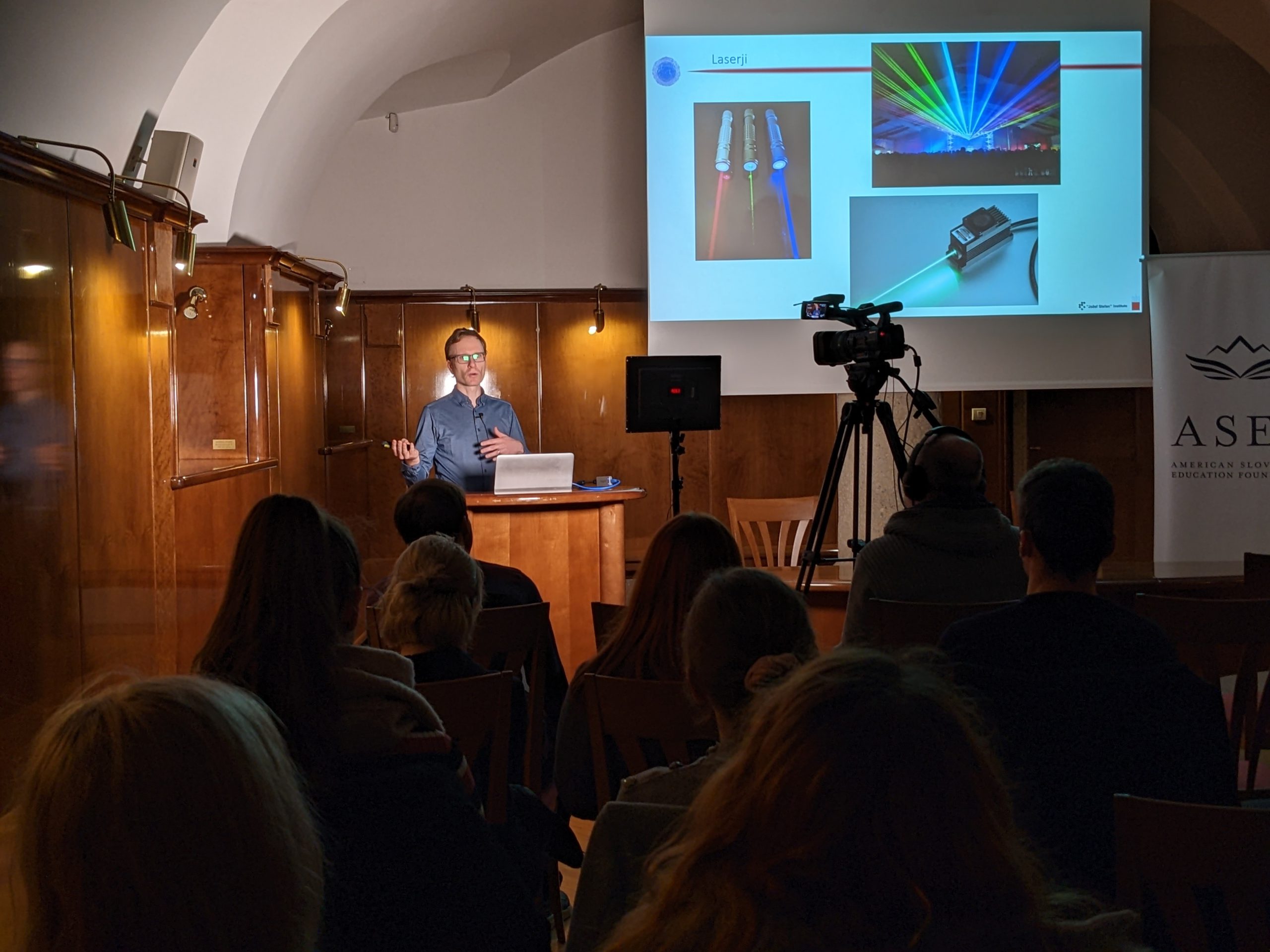 Dr. Humar went on to describe his research career. He obtained his Ph.D. at the Jožef Štefan Institute, where he worked on microlasers. Later, he was inspired by a paper on a cell embedded in a laser and decided to do postdoctoral research at Massachusetts General Hospital, where he combined his knowledge of physics and biology and gained a lot of scientific experience. After his research, Dr. Humar and his team succeeded in creating the first laser inside a human cell, which attracted a lot of attention from national and international researchers. They achieved this by embedding very small spheres with fluorescent dye inside the cells and amplifying these spheres with an external light source.

He then gave a presentation on how lasers can be used for a variety of biological analyses. Each laser is unique due to certain properties, so we can monitor how cells change, analyze them and treat them. He also mentioned lasers that are sensitive to glucose, which contributes to a better diagnosis of diabetes. Current diagnostic methods, such as X-rays or MRI, do not have good enough resolution, but lasers could be used to analyze tissues and even individual cells much better. It is also interesting that we can even have lasers in our own bodies. One such example is lipid droplets in fat cells, and such a laser is really alive, because it grows, divides, and even heals itself. 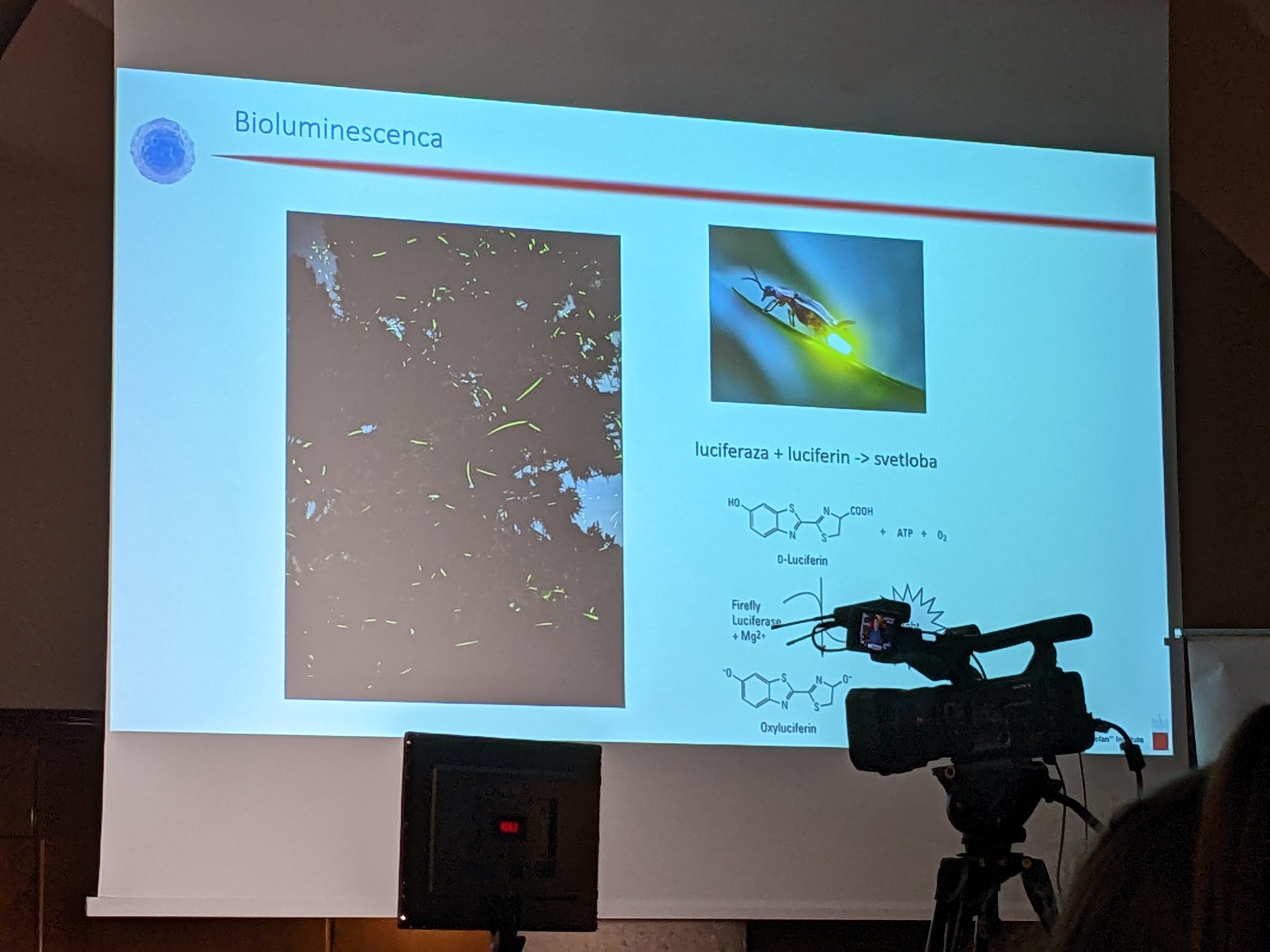 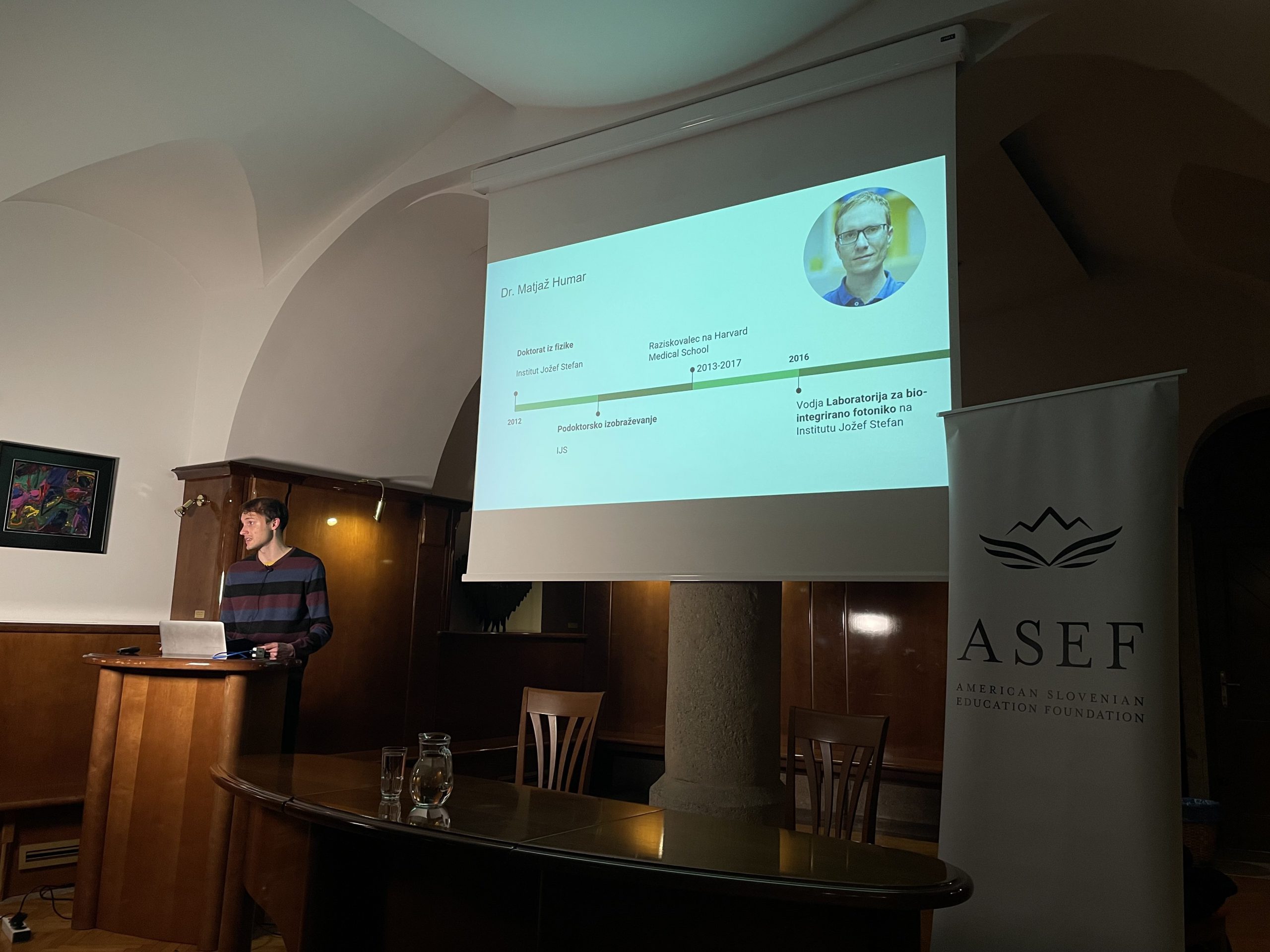 At the end of the lecture, he showed an example of the use of lasers in medicine for wound healing. Dr. Humar was working on the possibility of using a laser to close a wound without using stitches. However, since the light does not go deep into the tissue, he also presented a waveguide that is made of biocompatible substances. He summarized the lecture by describing his journey to his own laboratory at the Jožef Štefan Institute.

The event was held in a hybrid format, both in the Prešeren Hall at SAZU and via Zoom, and was moderated by 2022 Junior Fellow Gregor Kržmanc.