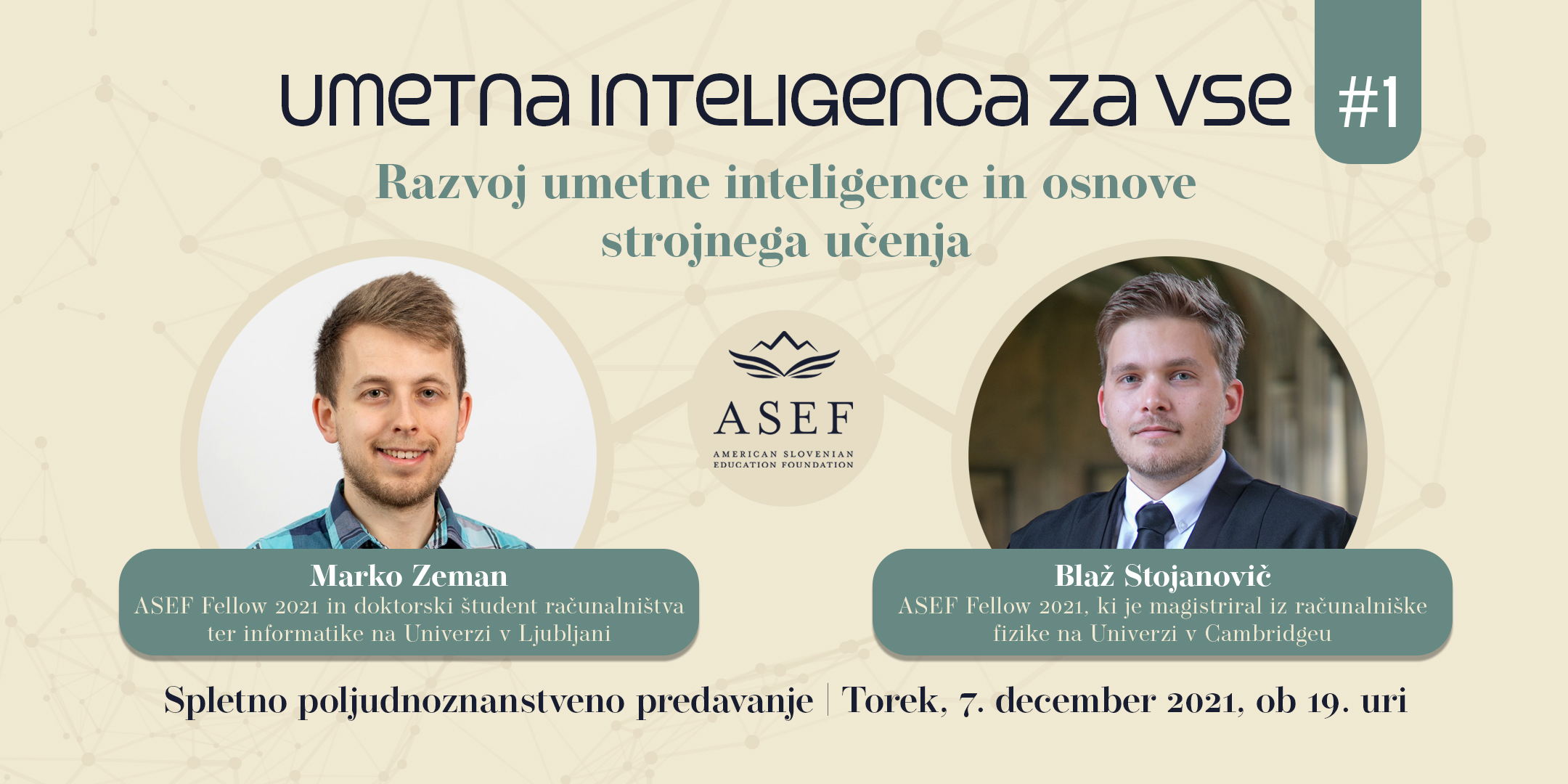 Artificial Intelligence for All #1

In December, ASEF is organizing two online popular science lectures, Artificial Intelligence for All, which will be conducted by ASEF Fellows of the 2021 generation Marko Zeman and Blaž Stojanovič. In the second lecture, they will present modern methods and successes of artificial intelligence and challenges in the future. The lecture will take place on December 7 at 7 pm in the Slovenian language.

REGISTRATION
To watch the second lecture, you must register by December 14 at the latest by 6 pm: https://bit.ly/3wstv2m. The zoom link for access will be sent to all timely registered users by e-mail on the day of the event.

ABOUT LECTURERS
Marko Zeman is an ASEF Fellow 2021 and a doctoral student of computer science and informatics at the University of Ljubljana, where he researches the field of artificial intelligence. In recent years, he has focused his study of computer science primarily on the challenges of machine learning and deep neural networks. He is currently working on the problem of learning several different tasks in the same neural network and exploring different ways of adapting a neural network to solve new tasks.

Blaž Stojanovič is an ASEF Fellow 2021, who completed his undergraduate studies in physics at the University of Ljubljana and then his master’s degree in computer physics at the University of Cambridge. He deals with the use of machine learning methods in science, especially in the field of statistical physics. He is also interested in how mathematical methods of statistical physics can help in understanding the efficiency and robustness of learning algorithms.

ARTIFICIAL INTELLIGENCE FOR EVERYONE
The lecture is part of a series of two December popular science lectures to be given by ASEF Fellows and is called “Artificial Intelligence for All”.

At the first lecture, which will take place on December 7 at 7 pm, the two young lecturers will present the development of artificial intelligence and give the basics of machine learning. Registration: .

In the second lecture, which will follow on December 14 at 7 pm, they will talk about modern methods, the successes of artificial intelligence and the challenges of the future. Registration: https://bit.ly/3kg1g1O.