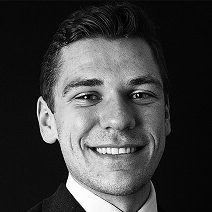 Thomas Fitzsimmons is a visual communicator with a passion for multimedia. Thomas will be interning at Studio Siposh doing video production and working alongside filmmakers and aerial cinematographers. Thomas has studied communication and graphic design and plans to attain a master’s degree in Theology in the future at the Pontifical Atheneum of Sant Anselmo in Rome. Thomas hopes to learn valuable skills that will set him apart in the cinematography world, he is excited for the opportunity to create multimedia content in one of the most beautiful countries in the world and plans to maintain a long-lasting relationship with ASEF long after he leaves. Thomas is excited since this is his second time visiting Slovenia. His first time was in 2016 during a visit he had while living in Europe for a study abroad semester in Italy. Thomas had the chance to visit family in Slovenia and met his Slovenian cousins and had the chance to walk the same streets in Ljubljana as his Grandmother and Grandfather did before they immigrated to the United States. Thomas is often found running, he has run two marathons in the states, and plans to do his third somewhere in the EU, Thomas also loves and drone videography, photography, editing video, and calling his 82-year-old grandmother and teaching her tips and tricks on how to use her iPhone.